A Black Lives Matter activist, thug and criminal by the name of Tef Poe has a message for the white people of America. In fact, it’s a threat. He tweeted out on Wednesday, “”Dear white people if Trump wins young niggas such as myself are fully hell bent on inciting riots everywhere we go. Just so you know.”

That’s right, this inciter of insurrection, a crime under our Constitution, actually informed people with light pigmented skin that the “niggas” would be coming after us and rioting everywhere, which I assume means in my home town too.

However, once he was called out on it, he played the victim, removing his tweet and claiming that he never made such comments. But the internet is unforgiving for this man who is taking a page from the sodomite and Muslim playbook of pulling your hair and smacking you in the face only to turn around and claim they are the victim. 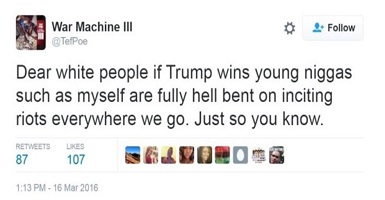 Then carrying on as if he was Nation of Islam leader and open racist Louis Farrakhan, he followed…

For the record, the majority of Black Americans want no part of Black Lives Matter and their agenda as financed by the likes of George Soros, the Communist Party and under the direction of the White House.

Eight years of oppression, setbacks in the Black community courtesy of Barack Obama not to mention the Marxist propaganda and staged events under this administration is exactly why so many are support Donald Trump.

Trump is a threat to Progressive leadership of both parties and their oppressive ideology.

GOP: Do not get it twisted. While many are feeling Donald Trump (and therein lies the threat emanating from BLM as if most of us gave a damn about their threats), betray Trump, the voters and the momentum is lost.

Black Lives Matter speaks for no one but those writing their checks.

H/t Give Me Liberty.