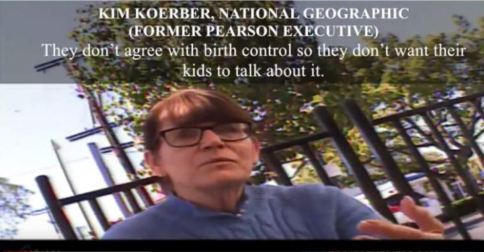 The New American by Selwyn Duke

Islam is in and Christianity is out, the Founding Fathers are just “dead white guys,” “D**n the Second Amendment,” and people who oppose Common Core are “idiots.” These are just a few of the sentiments expressed by a former marketing executive for textbook publishing giant Pearson Education, as she reveals on hidden camera that the federal government’s Common Core and Advanced Placement U.S. History framework are designed to indoctrinate America’s children with a leftist world view.

Kim Koerber made the startling comments in the third video (below) of a Project Veritas series on Common Core, the controversial educational scheme Barack Obama has sought to impose on states nationwide. As Project Veritas reports, the former Pearson insider, “who now works for National Geographic, was caught on camera justifying the Common Core curriculum on the grounds of anti-American and unconstitutional values. ‘People that are not educated, Fox TV viewers, think that Common Core comes from the educated liberal groups and that’s why they are against it…,’ revealed Koerber to undercover Project Veritas journalists….”

Whether it is through textbooks, SATs, Regents or in the classroom, these Marxist indoctrinators should not be allowed anywhere near our educational institutions.