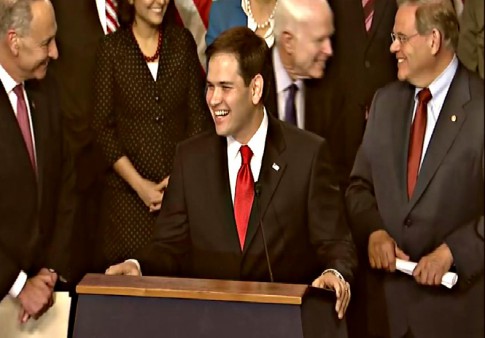 Florida Senator and 2016 Republican Party establishment primary candidate, Marco Rubio failed in his attempt to smear Senator Ted Cruz during their exchange the other night on immigration during the debate.

There is no shortage of evidence proving that Rubio who is in the pockets and backed by those entities behind the smear campaign who are also benefiting from illegal immigration, i.e., the “open-border donor class.”

Political analysis of the Las Vegas debate immigration dust-up between Sens. Ted Cruz and Marco Rubio is missing a key ingredient: the money factor….Rubio’s brazenly fraudulent campaign to paint Cruz as soft on illegal immigration is a flabbergasting attempt to distract from the Florida junior senator’s faithful allegiance to the open-borders donor class.

Here’s what you need to know:

Facebook, Microsoft and Silicon Valley back Marco Rubio. Mark Zuckerberg is a social justice CEO who panders to Hispanics with his pro-amnesty, anti-deportation advocacy; Facebook is an H-1B visa dependent company working hard to obliterate hurdles to hiring[…]