Less than six blocks from the parade route, Carey Gaby, Esq., age 43, Andrew Cuomo’s first deputy general counsel at Empire State Development, was shot in the head by a stray bullet as he and his brother attempted to take cover when as shootout began nearby between rival gangs.

A fight broke out Monday morning shortly before 4 a.m. as Gabay and his brothers left a party and were walking down the street near Ebbetts Field Houses, located in a particular unsavory section of Flatbush known to be extremely dangerous, any hour of the day, any day of the week.

According to police, two sets of people were firing shots at each other, on Empire Blvd. and on Bedford Avenue. Police recovered a semiautomatic weapon and 16 shell casings from the scene, they said.

After the incident, which happened at 3:41 a.m. ET, Mr. Gabay was taken to Kings County Hospital, where police said he was in critical condition and likely to die….

According to Aaron McNaughton, Gabay’s younger brother, “It was just totally random. Some guy walked up and was spraying bullets everywhere. I can’t believe it. He was a good guy, he just didn’t deserve this.’’

The shooter fired 8 to 10 shots into the crowd. Insane.

Gabay whose wife is pregnant is on life support while doctors make arrangements to donate his organs.

Unfortunately, the streets of New York, let alone Brooklyn, let alone this community will have had more than its share of bloodshed by Tuesday morning.

Not far from the shootings, a young man in his 20’s was stabbed. Video clip below (Warning: GRAPHIC).

On Sunday afternoon NYPD announced that it was dispatching 1500 officers to monitor the pre-dawn parties in Brooklyn. Little good that did to anyone victimized, raped, maimed or killed while out reveling.

The NYPD is dispatching an additional 1,500 cops to keep an eye on pre-dawn parties before the West Indian Day Parade.

The J’Ouvert march through Flatbush is an annual tradition that kicks off around 4 a.m. Monday in Brooklyn.

The party is full of dancers, costumes, bands and baby powder — but has also featured outbursts of violence in years past.

‘We don’t have stop and frisk anymore. So, obviously, all the stuff we had stopped them from doing will start over again. The pop-up parties are them drinking all night. They’ll see you driving around and stop what they’re doing,’ the source said…. 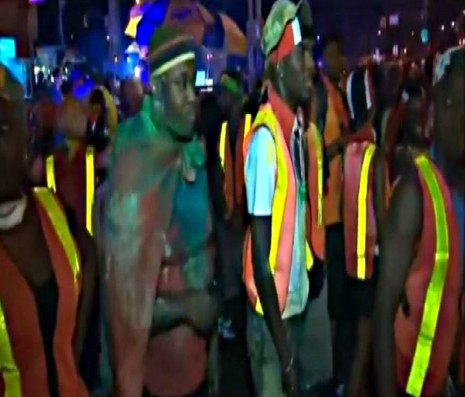 J’Ouvert “unofficially” begins around midnight and yes, it is an all night party of dancers, people dressed up in costumes, some in masks, steel bands on trucks and baby powder.

Combine that with alcohol, hot weather (last night was in the mid-70’s and humid), marijuana, the ingestion of other toxic chemicals non-stop for the next 24 hours and you have spontaneous combustion — VIOLENCE. (My perspective on J’Ouvert at bottom of post.)

Rather than deal with the problem that plagues the Black community, Black homicide, Black on Black violence, both Andrew Cuomo and Bill de Blasio staged separate press conferences espousing the usual propaganda calling for gun control in the very community where Blacks are shot and killed by other Blacks every day of the week.

At about the same time that Cuomo’s aide was shot, less than a half-mile away, Venita Haskins was grieving the loss of her 42-year-old son, Damon mortally wounded with a gunshot to the chest, the day before (Saturday evening).

Ms. Haskins lost her 32-year-old daughter, Tamecca Haskins one year earlier, July 6, 2014 not far from where Damon was killed.

Both were victims of Black on Black crime, the circumstances of which are eerily similar as both were shot in the chest

Reminiscent of the parades prior to and during the Dinkins era, liquor and marijuana was in abundance and enjoyed out in the open.

As it was during the Dinkins era, if you had respiratory problems, Eastern Parkway (the parade route) is the last place you needed to be on Labor Day.

The New York Post is this morning reporting that NYPD turned a blind eye to “blatant law breaking” at the parade. (Considering the attacks on law enforcement nationwide, can’t say I blame them.)

Bratton stated early Monday that there was no need to ban parties ahead of the parade in spite of the bloodshed, which the police commissioner called “unfortunate” but “no reason to not go forward with the events.” (Translation: If they want to kill each other, oh well…)

An older woman covered her nose as several young men shared a joint, dancing and blowing smoke into the air.

‘A lot is happening that isn’t supposed to be happening,’ she said, a look of disgust plain on her face.

One young man was also seen pouring Hennessy cognac into an iced-tea bottle, then doling it out into plastic cups. Three pals who were spotted drinking brown liquid from clear plastic cups as they cavorted along the parade route admitted that their beverage of choice was the same type of booze….

NYPD sources said supervisors have traditionally urged restraint when dealing with parade goers, with one cop saying the brass ‘forbid us from making arrests, no matter what we saw, because they didn’t want riots….’

The exception to the rule being if someone was shot on a float or off a float which harkens us back to Bill de Blasio’s quality of life problem in the City.

Drunken driver hits cop with vehicle while trying to flee in Brooklyn: police

Woman with walker fatally struck in hit-and-run just a half block from Brooklyn home (The driver involved in the hit-and-run finally turned himself in earlier today.)

Man, 68, clings to life after being struck by hit-and-run driver in Bronx: police sources
Off-duty NYPD cop arrested on DWI charge after smashing into two parked cars in Queens: officials
Man gets slashed by co-worker at East Harlem grocery store after argument

Police Officer Tibbets responded to a call for shots fired and took this gun off the streets of #EastFlatbush pic.twitter.com/d4L6qiiZ4m

Brooklyn: Rochester Ave & Eastern Parkway Crime scene being established in regards to a male stabbed, EMS requested on a rush.

MY PERSPECTIVE ON J’OUVERT

[No one who attends the yearly parade or the West Indian American Day Carnival Association itself gives a damn about crime unless they’re directly affected. The event is a cash cow with a massive sponsorship, a primary reason for denying that the parade and surrounding festivities provide motive and opportunity for thuggish elements.]

In addition to nearly a month of endless reveling and festivities pre-Labor Day, there is always the sudden uptick of crime and violence Labor Day weekend.

Opportunity strikes as thousands of people from all parts of the world converge upon the community.

More than 2 million people attend the parade annually, preparations of which begin every year for the following year the morning after Labor Day.

On the weekend before the parade, there are pageants, costume balls, and parties throughout the area (city).

The clubs open about 7 pm Sunday evening and the parties start. Many leaving the clubs rather than go home pace the streets near the floats, steel bands and huge speakers are embedded flatbed trucks throughout the largest Caribbean community in the United States.

Sometime during the night, early Monday morning (pre-4 a.m.), thousands join the early revelers in the streets around the trucks blasting the music all night.

As the caravan begin to makes its way through the streets of Flatbush and parts of Crown Heights, thousands follow, many in costumes, covered by powder and just as many inebriated and/or under the influence of whatever move about until finally reaching the starting point of the parade, hours later. (Fortunately, I do not live on that side of town but for those who do, it is a sleepless night/weekend.)

Familiar with the goings on of Labor Day weekend in New York City since the West Indian Day Parades began in the late 1960’s, as a mother of a Black male, I am relieved when my son (now in his mid-30’s) touches base with me.
An even bigger relief is that for the first time in 17 years, my son was here in my house with me all night long. Trust me; it has been years since I slept so well on Labor Day.

I know that I’m sounding like a spoiler but for me, this is yet another downside of a sanctuary city.

I don’t get it but then I am American and the West Indian Day Parade is not about America or its people, another reason it is not my cup of tea.

It was not until Labor Day 2012 after the September 11 Islamic terrorist attacks that the American flag was flown in this parade.

For the next four or five years after, the American flag displayed proudly sometime around 2008, those behind the West Indian Day Parade returned to their pre-September 11th anti-American habits.

The mentality is that while they make their living in the United States, feed of the American workforce, the parade is about them.

Complaints have poured in for decades about the violence around this parade, however, because it’s a means of showing off to the people at home and a cash cow for the organizers, Caribbean businesses and revenue for the City and State, no amount of dead bodies will put an end to this annual train wreck.

While Black lives matter, it is the battle for the golden goose that supersedes all.

Then there is the power struggle amongst the cliques, broken down by country.

As Americans, we mostly think of discrimination in terms of black v. white but in the Caribbean community, it’s broken down by country. (Trust me, I live in an apartment building full of tenants from different countries. From time to time, it gets dicey.)

Organizers of the West Indian Day Parade are making sure it’s run by a Trinidadian majority, say critics who are charging discrimination.

The West Indian American Day Carnival Association, which organizes the annual Labor Day event along Brooklyn’s Eastern Parkway, has raked in more than $1 million in city, state and federal funds over the past five years, but the nonprofit isn’t inclusive enough to deserve taxpayer dough, according to Rickford Burke, the head of the Caribbean Guyana Institute for Democracy….

In the end and based on the non-stop helicopters flying overhead from Friday night through Sunday morning and then again Monday night, I would bet the ranch that much of the violence committed this past weekend has yet to be made public.