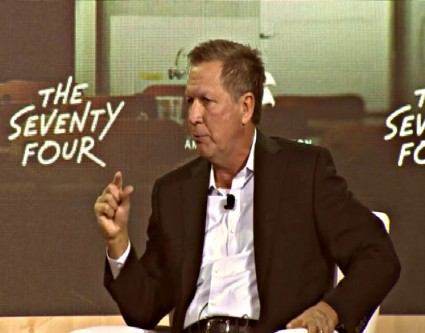 On Sunday, Kasich appeared on ABC This Week with George Stephanopoulos.

Among the many subjects discussed, was gay marriage and the incarceration of Kim Davis, which Kasich stands by (approx. 4:02 of video).

Love him or not so much, Kasich is polling as number 2 amongst New Hampshire voters.

Who is John Kasich? Well let’s just say that if and when Jeb Bush fails, Kasich is the establishment’s spare tire.

…And John Kasich is a perfect “spare” for the Republican establishment.

Like Jeb Bush he is the Governor of an electorally important state and like Jeb Bush he can make some claims to have governed as an economic and fiscal conservative.

But, as we pointed out in our article ‘The Big Government Four: Bush, Rubio, Huckabee and Kasich’ Governor Kasich often claims to be governing as a fiscal conservative; however, the reality is this claim is largely blue smoke and mirrors. …

Kasich’s job is to, if and when Jeb Bush fails, bring all Republicans holding their noses, once more, to the voting booths to vote booth to vote for the GOP leadership’s golden boy.

In fact, the leadership is counting on it. The Republican establishment bet against the voters in 2012 and 2014 and both times, we came through for them. Hence, they are counting on us again to be creatures of habit.