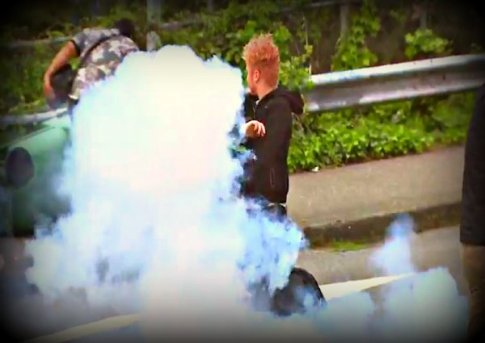 Some are referring to protests in Oakland, Portland and Seattle that turned violent between law enforcement and anarchists as clashes. However, while violence between the two groups may be considered as such, however, physical assaults on the media, police and the destruction and property as if one is suddenly possessed is a riot.

"There is a black cloud that hangs over Oakland." @Haleaziz on #MayDay vandalism aftermath. http://t.co/ZNK17VZMOs pic.twitter.com/Cwqwhveefj

@SFGate Weasel words from Chief Whent: "The crowd was also larger and “angrier than we had expected,”

Only a freaking anarchist would heart getting tased, flash banged, tear gassed and such.

@RT_America Hey stuff went down crazy in Portland too! More video to come. Video from #MayDay in #Portland Oregon! https://t.co/2skDwZTshI

As expected, Seattle’s May Day protest morphed into a riot when anarchists/THUGS began overturning dumpsters, throwing bricks and wielding a variety of weapons thus forcing law enforcement to clamp down quickly on the THUGS.

Law enforcement, some on bikes, others not deployed flash bangs and tear gas.

The chaos resulted with the arrest of more than a dozen protesters, two dozen vehicles trashed and three officers injured.

The difference between Baltimore mayor, Stephanie Rawlings-Blake and Seattle Mayor Ed Murray is that Murray made it clear that Seattle’s police would “work to protect people and property.”

Instead Baltimore’s mayor supposedly ordered her police department to stand down as rioters created chaos and destroyed property.

Seattle, May 2. Protests diminished. Some miffed people at Starbucks demanded two pumps of vanilla, only got one. #MayDaySea

The QFC on Broadway in Capitol Hill had a window broken and others spray painted during last night's #MayDaySea pic.twitter.com/9PBcFERnzv

Then get out of the F*cking street you Morons. RT @tylervanhelden: Stop F*cking Killing Us #MayDaySea pic.twitter.com/x5ZHxF3lhM

Loser lives in his mom's basement and sells pot for a living but he's gonna destroy capitalism #MayDaySea pic.twitter.com/aUTcRhY4mY

Found in trash can. Why a May Day protest flag could double as a dangerous weapon. Bolt attached to bottom. #Q13FOX pic.twitter.com/dBPkDhRsXe

BREAKING! Evidence has surfaced as to the actual cause of the Seattle riots… #MayDaySea pic.twitter.com/AwHJq3035j