Every day presents a new set of possibilities concerning the disappearance of Malaysia Airlines MH370 with no relief for the family, friends and loved ones of the passengers and crew. 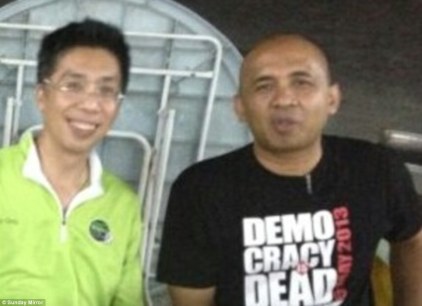 Peter Chong (left) with best friend Captain Zaharie Ahmad Shah, pilot of the missing Malaysia Airlines plane. He is pictured in a T-shirt with a Democracy is Dead slogan as police investigate claims he could have hijacked the plane as an anti-government protest. Image courtesy of DailyMail.co.uk.

Today’s twist is brought to us courtesy of DailyMail.co.UK who reports that Flight Captain Zaharie Ahmad Shah, pilot of MH370 was an obsessive political fanatic and supporter of Malaysian opposition leader, Anwar Ibrahim.

Ibrahim was jailed just hours before the departure of MH370 from Kuala Lumpur for homosexuality, the result of which may have sent Shah over the edge. (Ibrahim’s supporters say that the accusations are the result of a smear campaign and persecution.)

Ibrahim was jailed just hours before the departure of MH370 from Kuala Lumpur for homosexuality, the result of which may have sent Shah pictured above in a t-shirt with the words “Democracy is Dead” over the edge. Ibrahim’s supporters insist that the accusations are the result of a smear campaign and persecution. (Not to make light of this horrible situation, I feel like I am watching a Harrison Ford movie.)

In addition to the never-ending twists and turns, Shah’s wife and three children moved out of the home one day before the disappearance of MH370.

…It comes as FBI investigators say the disappearance of MH370 may have been ‘an act of piracy’ and the possibility that hundreds of passengers are being held at an unknown location has not been ruled out.

Officials also revealed that it is possible the aircraft could have landed and transmitted a satellite signal from the ground. If the plane was intact and had enough electrical power in reserve, it would be able to send out a radar ‘ping’…. 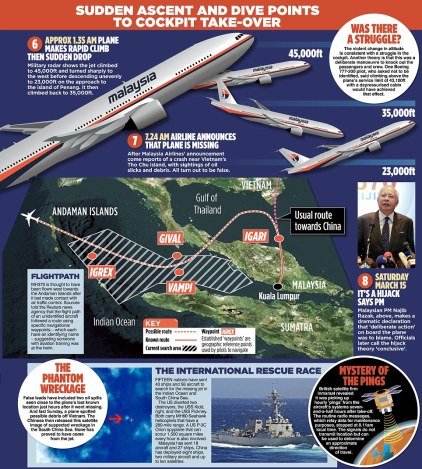 According to the Daily Mail, the search was put on hold “until ‘fresh search areas’ were defined by Malaysia.” This is lunacy. Surely, the families of the crew and passengers of Flight MH370 are at this point well past losing their minds.

At the same time, I am starting to get the feeling that there are those nations who for whatever reason would rather just call it a day and move on.

Finally, as reported in Xinhua, english.news, Malaysia’s opposition party (People’s Justice Party (PKR)) is dismissing news reports of possible links to Shah in addition to claims that the flight captain was a political fanatic. “…PKR communications director Fahmi Fadzil said the report of the British newspaper the Daily Mail was ‘wild allegations’ and the paper ‘is a sensationalist tabloid known for cooking up stories….”

UPDATE: Al-Qaeda Informer Warned Authorities of Malaysian Islamists’ Plan to Hijack Plane (Heads up to the Gateway Pundit who remains on top of this.)

… Al–Qaeda informer Saajid Badat told a court last week that four to five Malaysian Islamists were planning to take control of a plane, using a shoe bomb to blow open the cockpit door. The informer told the court he had met with the Islamists in Afghanistan…..