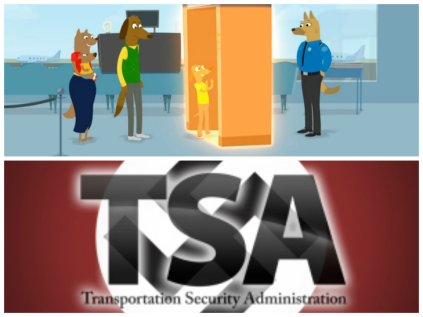 The video is shameless propaganda bordering on child abuse.

A government that lies to its people, let alone its children deserves neither our trust or our respect or that of innocent children.

Missing from the video are the backscatter x-ray machines that expose and take pictures of one’s body parts from head to toe as he or she steps into the machines with arms raised while shooting bands of cancer-causing radiation through one’s body.

There is also no mention in the video that the TSA’s invasive procedures are invasive, a fourth amendment violation, anything but voluntary and a show of might by the police state against the individual.

As reported by News Life, not portrayed in the video are the forced invasive enhanced body pat downs by TSA agents of one’s body private body parts even that of children by offending TSA agents because they are the police state and the commission of gate-rape has been ordained a prerequisite of their employment.

The rationalization:  “’Children who grow up in this age are exposed to police state activities on all fronts,’ explains PoliceStateUSA.com. ‘When an entire generation has been brought up to accept these behaviors as normal, they are conditioned to offer no resistance in the face of the police state as an adult.’”

Message: “You are of the collective and like sheep, you must comply. Do as you are ordered little sheep so that you too may be assimilated.”  H/t TPNN via Bad Blue Uncensored News.