Maybe the correct title of this post should be, “As if Limbaugh’s the only one.”

As most of you already know, I tend to at times view the world through another lens which I chose to do this past weekend.  I ran my own little test, the results of which are provided below.

I showed the above video clip of the statements made by Sandra Fluke, the Georgetown law student, who has indicated that spending $3,000 a year for contraceptives out of her pocket for her have sex is not financially viable for her and should thus be funded by the federal government, er correction taxpayers.

I asked for reactions to Fluke’s statements and must say that the responses were far more harsh than that of Rush Limbaugh.

Not sugar coated in anyway, I must warn you that the language that came out of said results at times are quite raw and may be offensive to some.

Bear in mind that I reside in NYC, a socialist state almost by nature. Everyone who shared their opinions consider themselves Democrats and voted for Barack Obama.  In addition, only a handful of those I interveiwed are a part of the welfare state.

GROUP 1:  My son and his buddies.  The average age of these men are from their late 20’s to late 30’s.  Some of the immediate reactions were as follows:

“Ain’t that what Planned Parenthood is for?”

“Georgetown huh? Where’s her dormroom?  I want to get in on this action!”

“What’s up with this b*****, she think she too good for Planned Parenthood?”

“How she gonna go on tv and put her business out there like that? What’s up with  that”

“She should be ashamed of herself.  Pay for your own contraceptives if you want to be out there like that.”

GROUP 3:  Mature adults (men and women) approximately ages 40 and over:

“I’m glad that’s not my daughter.  Her parents are paying for her to get a good education and instead she out there messing around all over the place.”

“That girl should be ashamed of herself going on down there and putting her business on the street like that.  That ain’t nothing to be proud of.”

“I don’t give a damn what she doing, I don’t want my tax dollars paying for her whoring around.  If she can afford to go to Georgetown, let her buy her own damn contraceptives.”

“These young girls out here are a bunch of whores.  I don’t know what their problem is.”

“Let her take her a** to Planned Parenthood, Walgreens, Duane Reade or Rite Aide like everyone else.  I ain’t paying of her to be out there f###### around.”

“She want to f### around, she can pay for her own shit.  I don’t pay for my own child to screw around there, why should I pay for someone else’s?”

“Thats why there’s so many diseases out there.”

Of course, when I recounted Limbaugh’s statement and the attacks being levied against him by the left, some folks responded “Rush Limbaugh, well he’s a racist anyway” while others agreed with the man even though they admitted that they were not Limbaugh fans.

One common denominator is that all were equally disgusted by Fluke’s statements.

For those who feel the need to lash out at me for my findings, forgeddaboudit!  They are what  they are.  I am not interested in engaging you, debating you, your attempts at baiting me or hearing from the Progressive side of the planet.

No amount of demonizing Rush Limbaugh will change the overwhelming viewpoints of Americans on both the left and the right in their true assessment of Fluke’s performance or the facts, which by the way happens to be that last week’s dog and pony show was exactly that thereby lacking any form of legitimacy whatsoever. 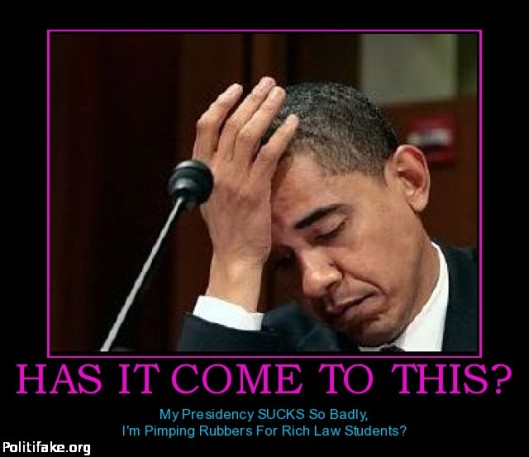 Moreover, Fluke is no victim or hero.  She is a so-called women’s rights activist close to a decade older than she stated last week before millions on C-SPAN and even worse a shameless propaganda tool for Progressives and guess whom else?  Oh yes, that never-ending campaigner-in-chief, Barack Obama, who rather than run on his   failingss must run on distractions, misrepresentations, tainted realities and Marxist propaganda.

I refer you to The Blaze’s article referencing Sandra Fluke being a flake, fluke and propaganda tool for Marxists, primarily Barack Obama (my choice of words not theirs – excerpt below).

“Since her controversial testimony on February 23, Sandra Fluke has been called many things, from a heroine to a ‘slut,’ but actually, she may just be a fake. Gateway Pundit and Hot Air suggest that may be the case, with citations to a post by Jammie Wearing Fools that introduces the following interesting information:

For me the interesting part of the story is the ever-evolving ‘coed’. I put that in quotes because in the beginning she was described as a Georgetown law student. It was then revealed that prior to attending Georgetown she was an active women’s right advocate. In one of her first interviews she is quoted as talking about how she reviewed Georgetown’s insurance policy prior to committing to attend, and seeing that it didn’t cover contraceptive services,  she decided to attend with the express purpose of battling this policy. During this time, she was described as a 23-year-old coed. Magically, at the same time Congress is debating the forced coverage of contraception, she appears and is even brought to Capitol Hill to testify. This morning, in an interview with Matt Lauer on the Today show, it was revealed that she is 30 years old,  NOT the 23 that had been reported all along….”

13 thoughts on “IN DEFENSE OF RUSH LIMBAUGH.”