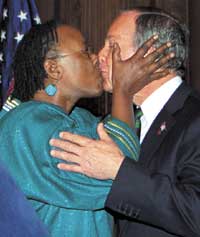 The list of reasons not to re-elect Michael Bloomberg gets longer every day.  Bloomberg in the past eight years has flip-flopped on his political affiliation, not once, not twice, but several times and now New Yorkers get to see the mayor in bed with the corrupt community organization, ACORN new deals.

In spite of the fact that ACORN is under investigation for fraud in several states, urban city mayors are looking to ACORN for assistance in an effort to stem the tide of foreclosures in low-income neighborhoods.  You can rest assured that votes have a lot to do with it as well.

The banks’ success in killing the bankruptcy modification “cramdown” bill in Congress has prompted New York Mayor Michael Bloomberg, L.A. Mayor Antonio Villaraigosa and the US Conference of Mayors to call for expansion of programs like an Acorn pilot in Philadelphia that mediates mortgage renegotiations between distressed homeowners and lenders.

Bloomberg — who is on good terms with Acorn CEO Bertha Lewis — will speak up on behalf of the group during a Thursday conference call discussion the Philly project and other mortgage plans, along with Lewis, Villaraigosa and Philadelphia Mayor Michael Nutter.

“That’s not an issue that we deal with on a local level in New York,” said Cestero, who succeeded current HUD Secretary Shaun Donovan in the Gotham job.

“They have been a solid housing provider in the city and a partner to the City of New York. We’ve worked with them in multiple areas with great success and no problems.”